Some time ago I had a chance to look through a big book of animals written over 100 years ago. It was interesting to see how they talked about animals at a time when scientists were beginning to recognize how great the risk of extinction was to many creatures.
Of all the cool animals I ran into, the Bering, or Steller’s Sea Cow fired my imagination the most. Perhaps, because it was gone from the subarctic over 200 years before I was born.

The Sea Cows of the Pacific, called Dugongs [dew-gong], are similar creatures to the Manatee of the Atlantic Ocean, but with several differences. The first thing you notice is the shape of their tail is more like a whale’s fluke than the rounded one their cousins have. Their teeth are different, and perhaps most important, the ones we’ve been able to study spend all their time in the ocean rather than traveling or living up fresh water rivers.

It’s always been fun thinking about these gentle creatures moving through the shallow waters off the coast of Australia munching on sea grass. In fact, they are found in places all the way from the east coast of Africa to islands just east of Australia.

What I didn’t know until running into that old book was they used to have cousins living almost up to the arctic circle until the middle of the 1700s.

Of course, it’s rather hard to find information on creatures no one has seen alive for so long, but I was able to find some cool things about them on AnimalDiversity.org. Here are a few of the more interesting bits translated from science speak:

The first time a scientist ran into and wrote about the Steller’s Sea Cow was in 1742 when Georg Willhelm Steller and his ship mates got stuck on an island where they lived. They survived the winter before they could rebuild their ship by eating the meat of these animals.

The Sea Cows weren’t scared of people and swam in groups sometimes so close to shore the sailors could wade out among them.

Besides where they lived, the biggest difference between Steller’s Sea Cows and the Dugongs still around was their size. Dugongs grow to about 8 to 10 ft (2.4 to 3 m) in length. A Sea Cow Steller measured was 24.6 ft (7.5 meters) long! We guess they weighed about 5 times as much as their southern cousins.

By the time we started writing about them, the Steller’s Sea Cow was living in only a few areas off the coast of Russia. But we’ve found fossils of them in places all the way from California to Japan. Life in modern times had gotten tough for them.

Steller’s Sea Cows didn’t have teeth like we think of them. They had “keratinous rostral pads” to chew with. Keratin is the stuff our fingernails are made of. Rostral means “beak”. You can see why they would call it a beak by looking at its skull.

When Steller wrote about them, he said the creatures were unable to dive. We rather doubt this, but figure the amount of gas needed to digest poorly chewed vegetation (all sea cows are vegetarians) would have made them so buoyant they wouldn’t have spent much time under the water.

We’re also pretty sure this helped the Steller’s by allowing them to swim in close to shore. Plus, it kept their backs out of the water so the water dwelling parasites trying to eat into their skin had less area to bother them. It would have also helped them lose less heat to the cold water and even swim more easily.

Now for the sad part. The last reported kill of a Steller’s Sea Cow was in 1768, just 26 years after the first report. Their meat was delicious, easy to catch, and we figure other things humans were doing in the area, like killing the otters that stopped sea urchins from eating all the sea weed, led to their extinction.

In fact, from fossils we’ve found, there used to be over a dozen varieties of Dugong. Today there is one.

Life since Adam disobeyed has been rough on God’s creation, but it is an honor and privilege to learn about God’s creativity and genius in inventing so many amazing creatures. 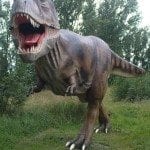