I don’t know about you, but when I first saw a picture of a Gharial [pronounced guhr-ee-uhl], I thought I had gone back in time! Turns out these guys have managed to hang in there when lots of the other big, scary looking reptiles died out. 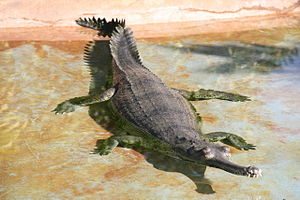 They have lovely skins for making leather, and like dragons, they don’t make very comfortable neighbors for people, so there are places we know they were living recently but are probably extinct in now.

In the 1970s we got down to less than 60 known adult Ghurials alive, and with careful conservation efforts there are about 1,300 in the wild, and another 1,000 living in captivity [zoos and things].

So, where would you have to go to visit a Gharial? Well, if you go visit Mt. Everest and Co. then decide to go kayaking down the rivers that flow from the Himalayas, you would have the best chance. Once they lived in the rivers of all of the neighboring countries: Bhutan, Bangladesh, India, Nepal and probably Myanmar [Adoniram Judson’s Burma] and as far west as Pakistan. Most of the wild Gharials still alive are in India and about 100 are known to live in Nepal.

The first thing you notice about these guys is their snouts; over a hundred needle-like teeth sticking out of a super thin muzzle, just right for snagging fish. As Gharials age, their snout doesn’t grow as fast as their bodies, so it looks shorter and they also thicken up a bit.

People don’t have to worry about Gharials bothering them, their snouts are too fragile to take us on. Male Gharials develop a big bump called a ‘ghara‘ [pot in Nepali] on top of the tip of their snout. No one’s sure what it’s there for, but we figure the ghara either makes them look handsomer to the ladies, or helps their rumbling noise to buzz attractively.

Second largest of the crocodilians behind the Salt-Water Crocodile, male Gharials today can grow over 20ft in length with females being only about half as long. They are known to live for up to 60 years.

Besides the shape of their muzzle you can tell a young Gharial by its pale greenish-gray skin that will turn a deeper olivey gray as it gets older. God gave them strong webbed claws to help them swim quickly. Their tails are squeezed to be tall and skinny with high ridges forming a Y going out to the tip.

Gharials spend most of their life in deep, clear water. Young Gharials are fond of the fast flowing currents in the middle of the rivers while their seniors prefer the still pools like those found in river bends.

Their long bodies and strong tails are well suited for their watery environment while their short legs make it impossible for an adult to raise itself off its belly on land. This doesn’t bother Gharials since they only have to come ashore to lay their eggs and all their food is there for them in the water. Quick, young Gharials like to eat bugs, both adult and larva, along with frogs and fish. Bigger adults eat mostly fish with the occasional water bird or poor, drowned animal for dessert.

Thank you, Jesus, for inventing such an amazing creature and preserving it for all this time. Please help us to recognize how special your creation is and care for it as a treasure from you. 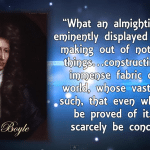 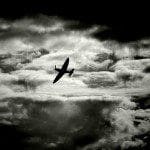