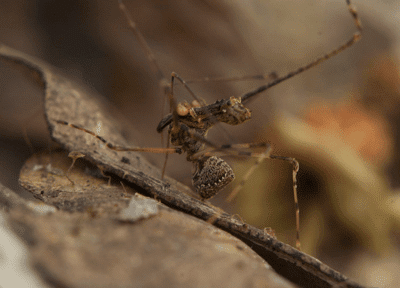 In 1881, in the eastern rainforests of Madagascar, a spider hunter named Octavius Pickard-Cambridge stared in disbelief as a long-necked spider walked straight out of the fossil record. But it was first described from Eocene Baltic amber in 1854, which is evolutionarily ‘dated’ at 44 million years (Ma) old. (1) It’s yet another example of a ‘living fossil’: a living creature that looks identical to a fossilized creature that supposedly lived millions of years ago. (2) This obscure little ‘living fossil’ is known as a ‘pelican spider’ (family Archaeidae).

This little spider is bizarre. It does not build a web. It has massively elongated, spiked jaws (chelicerae) that can extend outward at 90 degrees, a long giraffe-like ‘neck’ and stilt-like legs that enable it to hover over its intended prey—other spiders! The fact that the victims are exclusively other spiders just adds to its mystique, which also gave rise to their other common name, ‘assassin spiders’. (3) The hind legs are much shorter than the front ones, enabling it to feel out the webs and bodies of other spiders with the elongated front legs.

There‘s no reason to think the current distribution of pelican spiders has anything to do with the idea of continental drift over eons of time.

Living pelican spiders (archaeids) have only been found in Madagascar, Africa and Australia, with similar creatures (family Mecysmauchenidae) found in New Zealand and Chile. This has been used to support the idea that these places were once one continent—commonly known as Gondwana. Archaeids have been used as a weapon against the Bible because of their Gondwanan distribution and their supposedly poor ability to travel (how did they disperse so widely following the Flood?).

However, this doesn’t fit the long-age story for these spiders. According to the usual evolutionary scenario, they were in Burma—a part of Eurasia, not Gondwana —well before continental drift supposedly joined parts of Gondwana with Eurasia. These little spiders have been found in Burma, ‘dated’ to about 90 Ma ago. But long-agers think India and Madagascar were originally one land mass that split from Gondwana. India and Madagascar supposedly split apart after they split from Gondwana about 65 Ma ago. And India, presumably still sporting pelican spiders, supposedly first joined to Eurasia about 43 Ma ago. (1) So there’s no reason to think the current distribution of pelican spiders has anything to do with the idea of continental drift over eons of time.

I have also seen one of these spiders produce a long silk thread as it dangled from my hand. They then could float on the wind in a dispersal method known as ballooning, reaching places thousands of miles from their origins without the need for ‘deep time’.

May the forests of Madagascar be here for future generations to marvel at the freakier designer-labels of creation and give glory to the One who spoke it all into being. (3)

1. Penney, D., Afrarchaea grimaldii, a new species of Archaeidae (Araneae) in Cretaceous Burmese amber, Journal of Arachnology 31:122–130, 2003.
2. See Living fossils: a powerful argument for creation, Creation 33(2):20–23, 2011.
3. The subject of predation and carnivory in a world God described as ‘very good’ is discussed in the context of the Fall, when death and suffering entered the world, in chapter 6 of the Creation Answers Book (Creation Book Publishers).

Len de Beer, B.Sc.(Hons.) entomology, is a passionate entomologist, artist and naturalist who has taught internationally in many countries. He loves to explore, paint, and to fire up young people to appreciate the world that God has blessed them with. www.creation.com 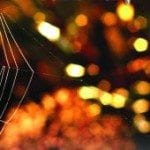 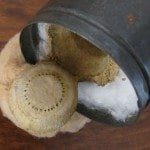