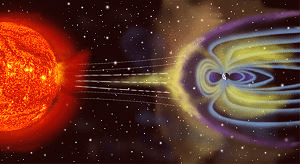 Artist’s rendition of Earth’s magnetosphere. The Aurorae show up where the blue lines come in toward the earth.

As a girl, while traveling to our new home in Alaska and then during years living there we often got to see the Northern Lights: the Aurora Borealis. I knew they were caused by tiny particles from the sun colliding with earth’s magnetic field. Now I know lots more about these amazing events and the power of God’s protection over us.

For the basics, check out Astronomy For Kids to read up on what’s happening.

On the Alaska Public Lands page, they mention that the Aurorae [plural of Aurora] are highly electrified. Sometimes they are so strong they knock out electrical equipment or even a whole power grid. This dose of power isn’t always a bad thing, though. Transmitters, like radios and telephones (the site doesn’t say if those are landlines or cell), can work by the electricity coming from the Aurora alone!

The basic cause of the Aurorae is the “Solar Wind” coming off of the Sun and running into particles in earth’s magnetic field which push them back away from earth (that page is really cool, check it out!). As the particles calm down from this collision, they give off the lights that we see.

The zone where the particles collide is known as the Van Allen Radiation Belt. It is pretty complicated stuff, so just follow the link if this is fascinating to you!

Just what is this Solar Wind and why is it important? Most of the Solar Wind is made of tiny electricity-conducting particles [plasma ions] blasting away from the sun. These particles would really mess up our electronics if they were able to get straight through to the surface.

But there is another piece to the Solar Wind puzzle: radiation. Some of the stuff that the sun puts out along with all that plasma is a form of UV radiation. If you’ve ever spent time in the sunshine without sunscreen, you know what UV does to you right away even under our protective shield. Imagine what all this would do to astronauts outside!

From technology review: “On Earth, humans are protected by the atmosphere, the mass of the Earth itself and the Earth’s magnetic field. In low earth orbit, astronauts loose the protection of the atmosphere and radiation levels are consequently higher by two orders of magnitude.

In deep space, astronauts loose the protecting effect of the Earth’s mass and its magnetic field, raising levels a further five times and beyond the acceptable limits that humans can withstand.”


Long term exposure to radiation is very dangerous to living beings. The radiation ions get right down into our cells and can cause all kinds of serious damage. You’ve heard of melanomas? That’s one kind of damage that UV radiation can cause. Our atmosphere with its ozone layer protects us from much of that kind of radiation. If we didn’t have a strong shield protecting us, life would have been wiped out by cancers and such long ago!
Advertisement Below:

Did you know that it is also a very good thing that the sun puts out all that radiation and plasma in the first place? Turns out that Solar Wind is a force field of its own called a Heliosheath to protect us.

The rest of the universe is filled with something called High-Energy Cosmic Rays. Pierre Auger Observatory has an interesting page on these. We can’t tell straight out what makes all this powerful stuff. Our best guess is that it comes from exploding stars, but they may be shot out from black holes or something completely unknown.

Since people have never traveled outside of our solar system, we can only guess what would happen if the sun wasn’t protecting us. Here’s a bit of what NASA has to say about Cosmic Rays:

Cosmic rays are different—and worse…. Unlike solar protons, which are relatively easy to stop with materials such as aluminum or plastic, cosmic rays cannot be completely stopped by any known shielding technology.

Even inside their ships, astronauts are exposed to a slow drizzle of cosmic rays coming right through the hull. The particles penetrate flesh, damaging tissue at the microscopic level. One possible side-effect is broken DNA, which can, over the course of time, cause cancer, cataracts and other maladies.

Thank you, God for protecting us from these things that would have killed us long ago! Thank you even more for providing a shelter of protection from the judgment that you are sending on sin!

Truly my soul waits upon God: from him comes my salvation. He only is my rock and my salvation; he is my defense; I shall not be greatly moved. God has spoken once; twice have I heard this; that power belongs unto God. Also unto you, O Lord, belongs mercy: for you give to every man according to his work. Psalm 62:1,2,11,12

Did you know the moon passes through the “tail” of our magnetic field every month and picks up quite an electrical charge? Fascinating stuff!

There is debate among scientists whether our magnetic field has allowed earth to hold onto its atmosphere better. We seem to be losing atmosphere at the same rate as Venus which doesn’t have a strong magnetic force. Seems to me this is just another sign that the earth with its water and thick atmosphere can’t be as old as they need it to be for abiogenesis to have time to work. 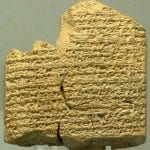 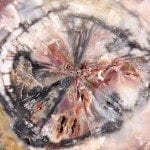