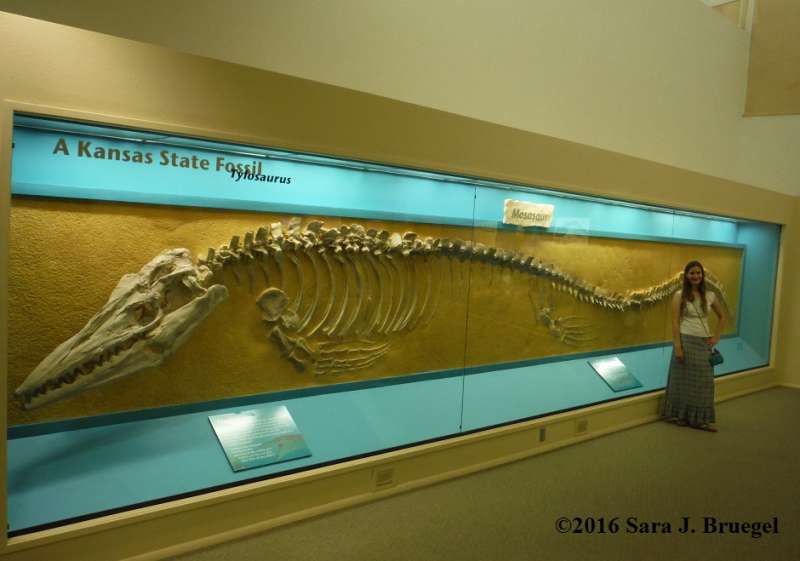 Beside a tylosaur (type of mosasaur) fossil at the Sternberg Museum in Hays KS, with Sara Bruegel

Sunlight gleamed off the dark, smooth surface of the object, revealing a depth of color that dramatically contrasted the light colored dirt it sat on.  It was a familiar, fascinating fossil . . . a mosasaur tooth.  Exploring the area around that tooth showed that it must have washed out from one of the layers above and the rest of the creature was probably long gone and scattered.  Three years ago, digging at a different site in the area, our team dug out what looks like part of the top of a mosasaur skull (read more about that here).  Mosasaur fossils are one type that is usually known to be found in the Niobrara rock formation of Kansas that I was digging in last month (more about the dig here).

After seeing what this creature might have looked like alive, most people would think of mosasaurs as dinosaurs that lived in the water.  For practical purposes, thinking of a mosasaur as a “water dinosaur” works, but technically only land-dwelling creatures are officially “dinosaurs”.   Probably the most accurate common name for them is “sea dragon”.   Although all creatures had vegetarian diets before the first people chose to rebel against God, we can tell from the fossil record that mosasaurs were eating other creatures by the time of the global flood.  Some ammonite fossils have been found with bite marks that match up with mosasaur teeth (more about ammonites here).

Mosasaurs lived in the water, but breathed air and gave live birth to their young, much like whales.  The dynamic tale of how whales supposedly evolved says that whale ancestors started out in the water, eventually moved to the land, and apparently changed their mind by evolving back into a watery home.  The evolutionary story of how a mosasaur came to be is quite similar. Komodo dragons and even snakes are said to be related to mosasaurs.  Just because mosasaurs existed does not mean there must be a wild evolutionary story to explain how they got here, why they are extinct, and what other things they might be related to.  Here’s an illustration to help you understand a problem with the evolution of whales, mosasaurs, and evolution in general.

For college math courses, I remember “proving” different equations using different “identities” (things we already know are true) from trigonometry.  There was one homework problem I worked on for quite a while filling up an entire page of college-ruled notebook paper with each step in small handwriting, but couldn’t quite figure out.  I ended up asking my professor about it and the hint she gave me has really stuck with me ever since.  She said I was way over-thinking it, trying to use complex proofs, when the answer was actually very simple.  And that simple answer was rather profound. In math and science, the more complicated a theory or proof gets, the more likely it is to be wrong because there are more opportunities to make mistakes.

What in the world do trigonometry proofs have to do with mosasaur sea dragon fossils?  The tales of mosasaur and whale evolution are a lot like my math problem – a complicated answer that takes a lot of time, energy, and effort, but ends up not working out or making any sense.  All you really need to figure out where mosasaurs and whales came from are the simple, yet profound “identities”, those things we can already know are true about the origins of everything because they are in the Bible.  Yes, mosasaur evolution is way over-thinking  the simple (yet profound) origin of air-breathing sea creatures:

“Then God said, ‘Let the waters abound with an abundance of living creatures, and let birds fly above the earth across the face of the firmament of the heavens.’ So God created great sea creatures and every living thing that moves, with which the waters abounded, according to their kind, and every winged bird according to its kind. And God saw that it was good.” ~ Genesis 1:20-21 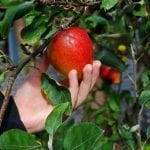 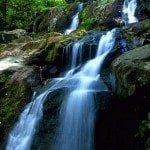