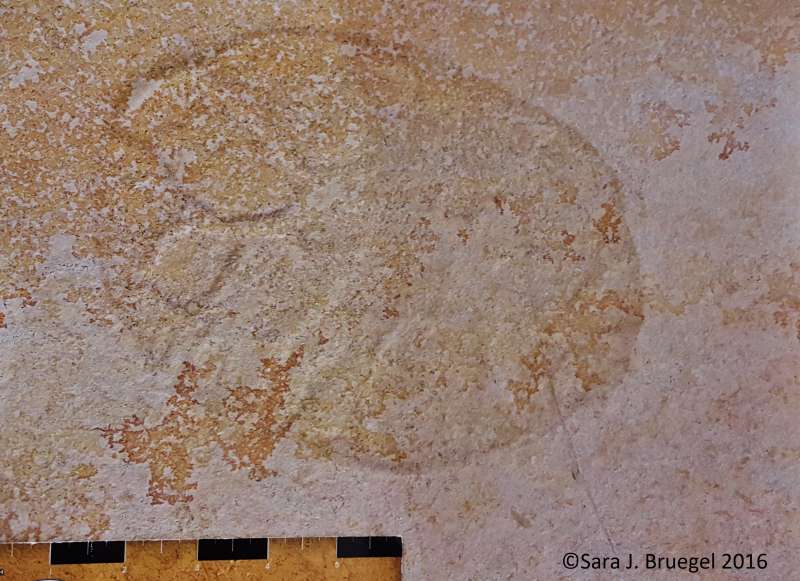 It had been an incredible, long morning at the international Tuscon fossil and mineral show. I had sore feet, tired eyes, and an empty stomach. Waiting for our last missing team member, I casually looked around at some of the fossils sitting on a nearby table. In a slab of rock next to a fish fossil, there was a large flat, circular fossil that I didn’t recognize. I paused to take a closer look. The single hand-written word on a little sticker next to the odd fossil made me gasp suddenly with delight! For several years, it had been the one rare type of fossil I have talked about and wanted to see in person more than any other – it was a jellyfish fossil!

Just the idea of a jellyfish fossil sounds all wrong. Most people think of bones, shells, and other hard body parts when they hear the word “fossil”. Today, we can see that jellyfish, classified in the biology phylum cnindaria, are truly incredible sea creatures that can glow and sting. They flow gracefully through the water and don’t have bones – their bodies are made up of about 96% water. After being washed onto the shore, it doesn’t take long before those beautiful bodies turn into a gooey mess. Other creatures, the motion of waves, and harsh sunlight batter their delicate remains. You certainly don’t see them turning into fossils on our seashores today.

To preserve a jellyfish as an imprint fossil in rock, it must be buried very quickly and not exposed to oxygen very long. The jellyfish fossil that I saw is from the Solnhofen limestone formation in Germany, which is classified as Jurassic rock (buried during the flood – more about how rock layers are classified here). Fossils in the Solnhofen formation, like this jellyfish, were supposedly gradually covered and preserved in the ancient “Tethys Sea”. However, it makes more sense to believe that these jellyfish were instead preserved by being buried quickly in the Biblical global flood just a few thousand years ago.

The fine-grained limestone of the Solnhofen preserves jellyfish and other detailed, delicate fossils quite well. However, a deposit of large jellyfish fossils with ripple marks was found in the coarse Mt. Simon-Wonewoc Sandstone of Wisconsin. Some of these jellyfish measured twenty inches across. The rock layer they are found in is classified as Cambrian, which is one of the lowest rock layers, laid down towards the beginning of the global flood. Delicate fossils like jellyfish are not preserved easily in coarse sandstone like this. Once again, they must have been buried very quickly to be preserved. Jellyfish fossils are a marvelous testimony of sudden burial during the global flood.

Life is short. Our time can disappear quickly. Don’t waste your life waiting – turn to the Lord in even the smallest aspects of life, and live. Don’t let your life turn into a gooey mess and disintegrate like modern washed up jellyfish. Choose to invest your precious time (your life) in things that will last for eternity. Choose to be like a jellyfish fossil – make an imprint that will last.

“For He knows our frame; He remembers that we are dust. As for man, his days are like grass; he flourishes like a flower of the field;for the wind passes over it, and it is gone,and its place knows it no more.” ~ Psalm 103:14-16

“So teach us to number our days, that we may apply our hearts unto wisdom” ~ Psalm 90:12 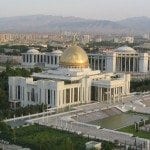 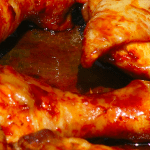